Between Canada and the United States combined, children suffer more than 300,000 concussions each year. Brain injuries can potentially result in serious repercussions for those living with them. The best way to avoid this is to receive the treatment necessary in a timely manner. Before that can happen however, the condition must first be diagnosed. Since the symptoms of a brain injury can vary and be hard to recognize this is not always easy to do. CT scans and x-rays alone are not definitive and may expose patients to radiation unnecessarily.

Accordingly, researchers have been working on developing a blood test that would reveal when a concussion has occurred. The results of a new study, involving diagnosing children with head injuries via blood tests, is promising. 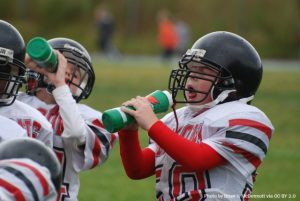 Photo by Brian J. McDermott via CC BY 2.0

While concussions can happen to people of all ages, the outcome can be particularly bad when it is a child who has suffered it. The study focused on 152 children who were dealing with brain injuries recently inflicted. They were given blood tests which looked for certain biomarkers. In addition, they underwent CT scans to look for lesions on the brain. The results were encouraging. Ultimately researchers determined the blood test was accurate in diagnosing a brain injury 94 percent of the time.

In addition to informing health care providers of the injury, the test also provided information regarding its severity. As an additional bonus, it does not expose young people to radiation.

The emergency medicine physician behind the study hopes the method will eventually be used in places other than the hospital to diagnose the injury. Since sports are a common way in which children suffer concussions, it is feasible that they might one day be available on the field.

Athletic activities are not the only situation in which someone might suffer a concussion. When a brain injury is the result of the negligence of another party the person who is hurt might seek compensation for the injury from the responsible party. Brian injuries are undeniably a complex injury. In addition to sometimes being difficult to diagnose, because no two people are... END_OF_DOCUMENT_TOKEN_TO_BE_REPLACED

The other day a client came into my office after being in a car accident. She wasn’t sure if we... END_OF_DOCUMENT_TOKEN_TO_BE_REPLACED In previous posts we have written about how post traumatic stress disorder could be a side effect following a brain... END_OF_DOCUMENT_TOKEN_TO_BE_REPLACED